Join us Friday, September 23, 2022, at the University of Minnesota McNamara Alumni Center for the LS-NSSA Kick-Off event to welcome the 2022-2023 academic year! 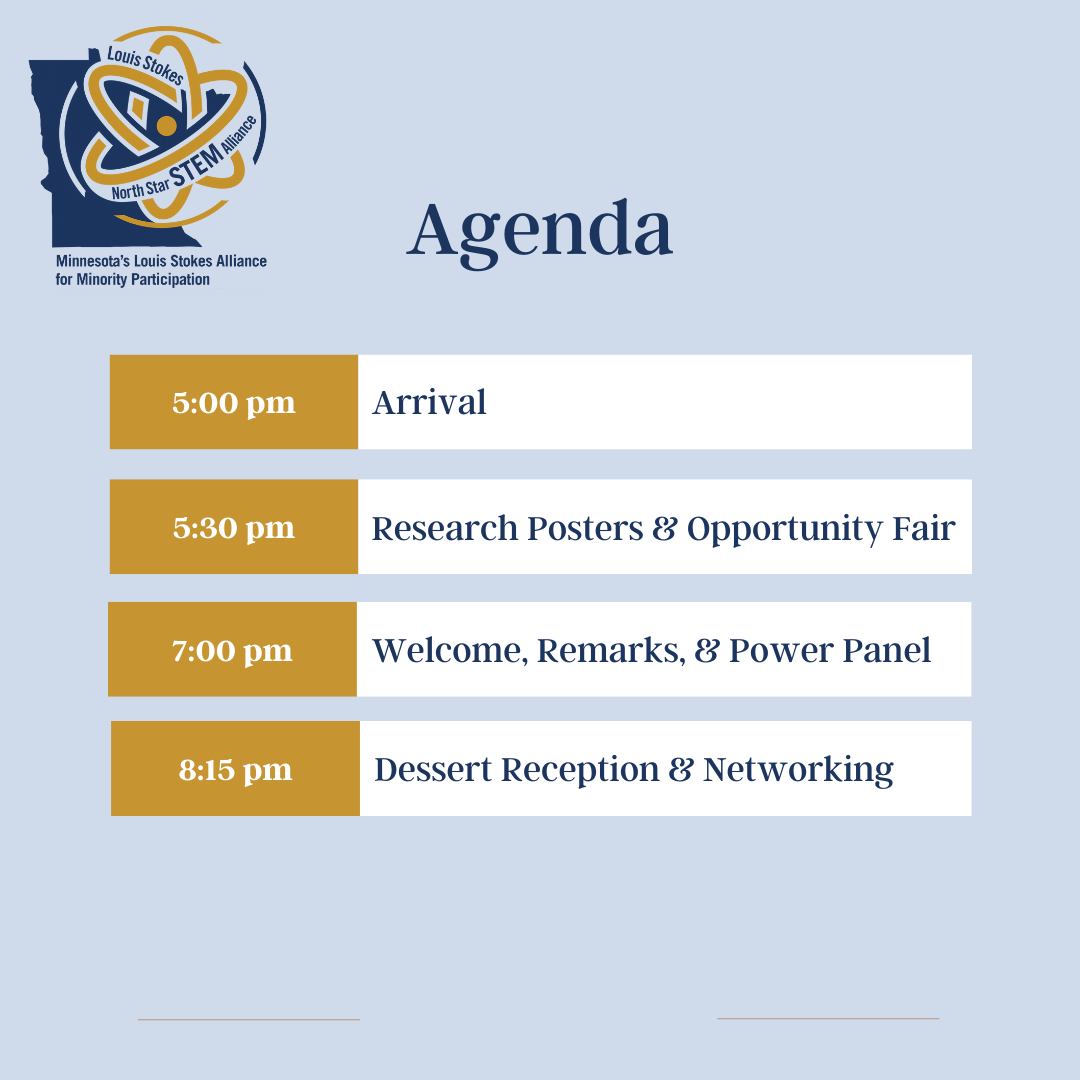 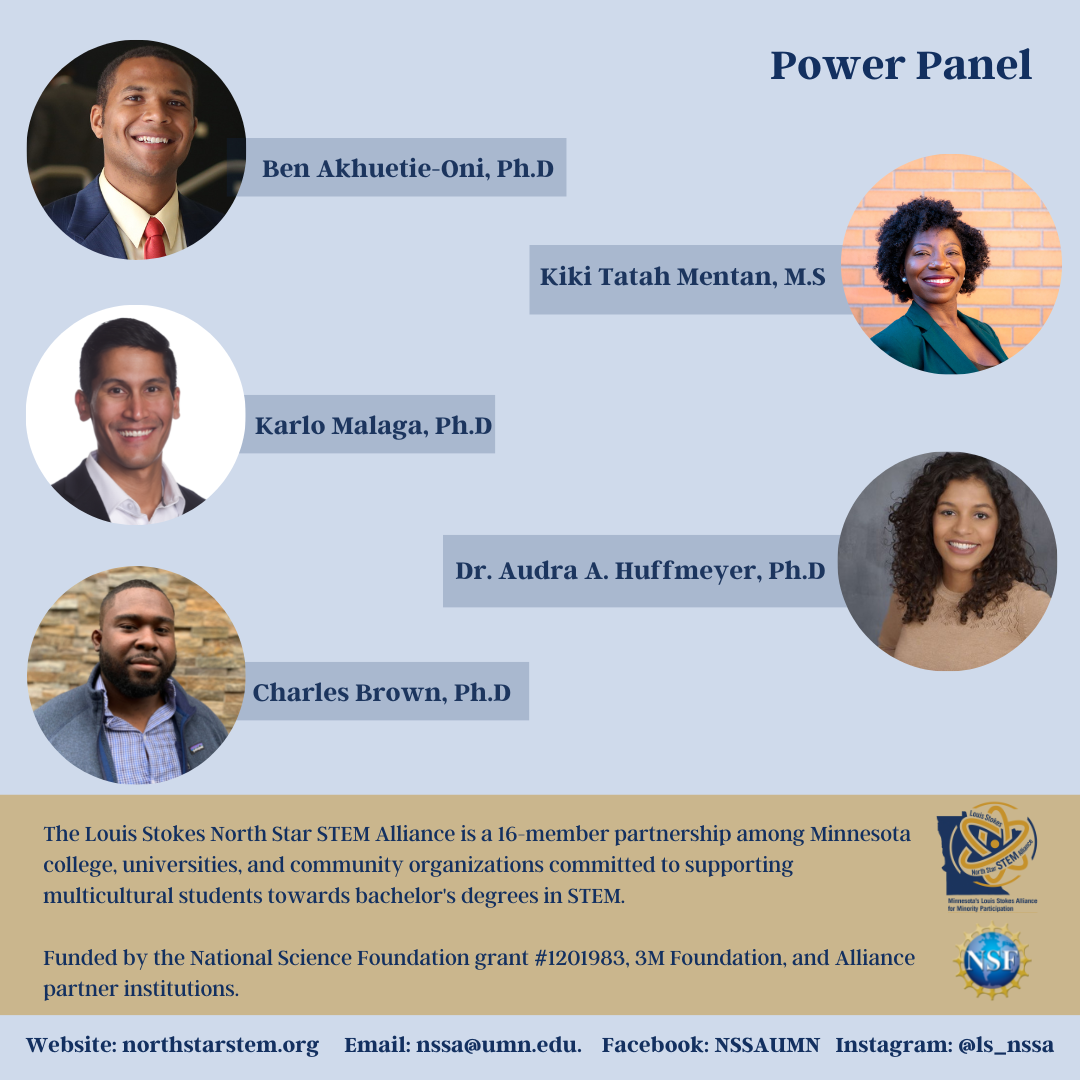 Nana Owusu graduated from Augsburg in 2013 with a BS degree in Physics. He was admitted to the Biomedical Engineering doctoral program at the University of Iowa in 2013 and completed his Ph.D. in August of 2021. Currently, Nana is a post-doctoral research fellow at the Mayo Clinic in Rochester, MN.

About our Alumni Speakers

Ben is currently a Senior Manager of Forecasting at Seagen, a global biotechnology company dedicated to developing new treatments for cancer. In his role, Ben supports strategic decision-making across the organization while being based in Seattle, Washington. Prior to joining Seagen, Ben earned his B.S. in Biochemistry from the University of Minnesota - Twin Cities (class of 2014), his M.S. and Ph.D. in Molecular, Cellular, and Developmental Biology from Yale University (class of 2019), and worked in Los Angeles for a leading Life Sciences management consulting firm. Ben is a proud North Star STEM Alliance alumni who helped organize and run workshops to help underrepresented minority students obtain STEM research experience. Outside of work, Ben is an avid hiker and you can find him at an alpine lake or mountain peak in one of Washington's three National Parks.

Kiki was born and raised in Cameroon, West Africa and moved to the United States of America in the year 2000. She is the 2nd oldest daughter of 5 girls ranging between age 27 and 35. She is the only Engineer/Rocket Scientist in the family. She attended the University of Minnesota where she earned her bachelor’s degree in Aerospace Engineering and Mechanics in 2010. She then went on to complete her master’s degree in Industrial Engineering in 2012. Currently works as an IT Project Manager/Scrum Master helping teams on their Agile journey to generate better business value. She has worked as a Project Manager/787 Payloads Design Engineer in the Seats Integration Team (SIT) organization. Prior to this current role she worked as a Liaison MRB Engineer for the 777X Composite Wing Fabrication Center and previously worked for a few years as Interior Responsibility Center/Electrical Systems Responsibility Center (IRC/ESRC) Liaison MRB Engineer for all programs in Everett, WA. A recipient of the BEYA 2019 Modern Day Technology leader award and in 2020 received the Women of Color STEM conference award for Rising Star. In her spare time loves to partake in STEM project working with student age range of 11 to 17 years old, coach people on professional interviewing skills, spend time with family, and travel around the world.

Dr. Audra A. Huffmeyer is a postdoctoral researcher in the Ecology and Evolutionary Biology Department at the University of California, Los Angeles, a National Geographic Explorer, a Product Manager at Github, and the Founder of Fil2R. Audra’s research focuses on the effects of urbanization, human expansion, and inbreeding depression on sperm quality in large cat species at the physical and molecular level. She has studied large cats domestically (mountain lions in Los Angeles) and internationally (tigers in Asia). Audra received her Doctor of Philosophy in Biology from UCLA where she was a National Science Foundation Graduate Research Fellow. Prior to UCLA, she was a two-time Smithsonian Institute Fellow at the Center for Conservation Genomics. She completed her Master of Science in Ecology and Evolutionary Biology at the University of Michigan, Arbor, and her Bachelor of Science in Conservation Biology at the University of Minnesota, Twin Cities.

Charles earned his B.S. with honors in physics at the University of Minnesota, Twin Cities. He then earned his Ph.D. in physics at Yale University, where he performed experiments with superfluid-helium-filled optical cavities and constructed and characterized a new experiment for studying magnetically levitated drops of superfluid helium in vacuum. Charles moved onto become a postdoctoral scholar and a National Academies of Science, Engineering and Medicine Ford Foundation Postdoctoral Fellow in the Ultracold Atomic Physics Group in the Department of Physics at the University of California, Berkeley, where he performed quantum simulation experiments with ultracold atoms in optical lattices. For his research accomplishments, he was recently awarded the Quantum Creators prize, and in January 2023 he will start as an Assistant Professor of Physics at Yale. Outside of the laboratory, Charles is a co-founder and co-director of BlackInPhysics, and co-lead organizer of #BlackinPhysics week, a week dedicated to celebrating the historical contributions of Black physicists and to painting a more complete picture of what physicists look like. On related topics, he has personally written – and overseen the commissioning of – several important essays, which have appeared in Physics Today, Physics World and Nature Physics magazines, among other prominent venues. For his non-research public facing work, Charles won the 2021-2022 UC Berkeley Chancellor’s Award for Civic Engagement.